Mike Pigott looks at the semi-waterline ship models in 1/1400 scale made by Siku of Germany.

In 2013, the long-established German company Siku introduced a range of cruise liners to its popular diecast line. These model ships were somewhat unorthodox, being of a semi-waterline design and made to the unusual scale of 1/1400, but were interesting replicas of modern liners not previously modelled.

END_OF_DOCUMENT_TOKEN_TO_BE_REPLACED

Mike Pigott focuses on the only aircraft model made by German company NZG, a vintage Lockheed Orion.

The German model manufacturer NZG is known today mainly for models of construction equipment and heavy trucks, but over the years has produced a wide range of different types of vehicles. NZG, like its compatriot company Conrad, are specialists at producing commissioned models for the original equipment manufacturers. These companies have become the ‘go-to’ manufacturers for industries which require promotional or commemorative models of products to give to prospective clients or sell as souvenirs. While NZG is mostly associated today with big trucks, cranes and plant machinery, since the company was founded in the 1970s, a wide range of different miniatures have been produced. These have included promotional car models for Porsche and Mercedes-Benz dealers, buses, fire engines, vintage vehicles, and very specialist items, such as diesel engines. Possibly the most surprising model was made by NZG in 1980 – a model of a classic aircraft.

END_OF_DOCUMENT_TOKEN_TO_BE_REPLACED

Mike Pigott looks at the 1/120 scale diecast railway models made by the German company Siku.

In 2010, the long-established German company Siku added a number of railway items to its popular ‘Super Series’. The Siku Super Series dates back to 1975, and is mostly a Hot Wheels sized range, but with cars to a constant scale of 1/55. Siku models are made to a much higher quality than Matchbox or Hot Wheels cars, with realistic wheels, detailed interiors and opening parts. However, Siku vehicles are usually two or three times the price of other makes.

The train models were not made to the regular 1/55 scale, which would have been too large; they were instead produced to a size that fit the standard blister packs. Fortunately, that size was 1/120 scale, or TT gauge. While TT gauge was something of a fad in Britain and the USA during the 1960s, it was extremely popular in Eastern Europe and has recently enjoyed a huge revival in Germany. Other manufacturers, such as Corgi and Lionel, have also produced diecast locomotives in 1/120 scale. The Siku trains were not intended to be compatible with TT model railway layouts, they were much simpler than the more detailed electric trains, and were aimed at children rather than collectors. However, they were reasonably good replicas, and – unlike the ranges by Lionel and Corgi – there were carriages produced to accompany the locomotives. All the models had rolling wheels and working ball-and-socket couplings.

END_OF_DOCUMENT_TOKEN_TO_BE_REPLACED

Mike Pigott looks at this little-known range of diecast motorcycles from Italian company Barlux and its successor Giodi.

There have been many famous series of toy motorcycles in approximately 1/32 scale, including a large range by Britains, and Mattel’s bizarre Rrrumblers. However, some ranges are less well-known, such as those made by Italian companies Barlux and Giodi.

END_OF_DOCUMENT_TOKEN_TO_BE_REPLACED

Mike Pigott looks at a large model of the popular cartoon cat made by Italian company Bburago.

END_OF_DOCUMENT_TOKEN_TO_BE_REPLACED 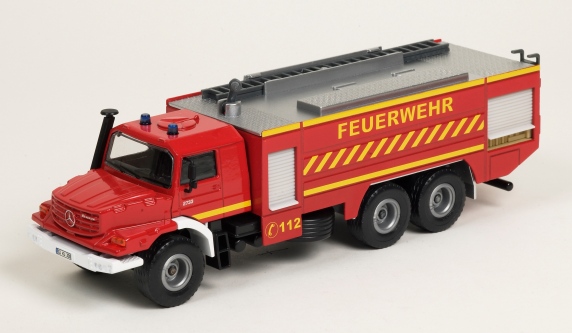 The Siku range from Germany has traditionally been made to a uniform scale of 1/55. The miniature cars and large truck models have always been in this scale, although many of the trucks and other vehicles in the Matchbox-sized Super Series were to ‘fit the box’ scale. Siku has consistently made very high-quality diecast products, which are probably closer to being toys than fine-scale models. The oddball scale of 1/55 and the abundance of moving parts meant that Siku not really compatible with fine scale models, and tend to be aimed at the juvenile market.

However, in recent years, Siku has begun manufacturing models in more standardised scales. There have been a range of tractors and agricultural vehicles in 1/32 scale, plus trucks, tractors and construction equipment in 1/50 and 1/87 scales.

END_OF_DOCUMENT_TOKEN_TO_BE_REPLACED

Mike Pigott looks at a pair of 1/50 scale combine harvesters made by Ertl of the USA. 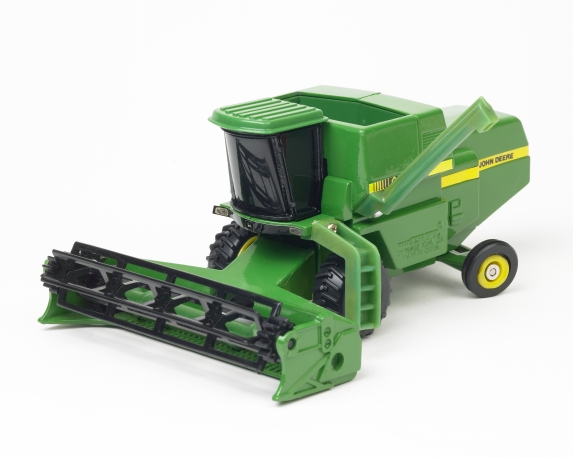 The Ertl company, based in Iowa, is a toy manufacturer that specialises largely in model tractors and other agricultural vehicles. In the 1980s, Ertl produced a pair of diecast combine harvesters in 1/50 scale, probably as promotional models for John Deere. These were the first and only agricultural machines made by Ertl in this scale.

END_OF_DOCUMENT_TOKEN_TO_BE_REPLACED

Mike Pigott takes a look at something a bit different that was marketed under the Hot Wheels brand.

Many readers may be aware, if only vaguely, that there was a series of 1/43 scale cars produced in Italy called ‘Super Hot Wheels’.  These models had their origins in the Mebetoys range.  Mebetoys was a producer of fairly good quality toy cars in the 1960’s, a contemporary of Mercury and Politoys, and to a similar standard as Corgi or Dinky toys of the era.  Around 1970, Mebetoys was acquired by Mattel.  The American Hot Wheels series was sold under the Mebetoys name, while the larger cars were sold as Mattel-Mebetoys.  As can be expected, the Mattel influence was strong, and soon there were hot rods and custom cars in the line, and plastic speed wheels replaced the more realistic ones previously used.

The 1/43 vehicles continued to be produced throughout the 1970’s, (although the quality dropped markedly) and were joined by a range of sparsely-detailed 1/25 cars.  There were two lines; the standard series in plain colours, and the deluxe range, which came with colourful decals and some accessories for the buyer to apply.  In 1984, a third 1/43 line was produced, the ‘Serie Avventura’, which I’m sure you can guess, means ‘Adventure Series’.

END_OF_DOCUMENT_TOKEN_TO_BE_REPLACED 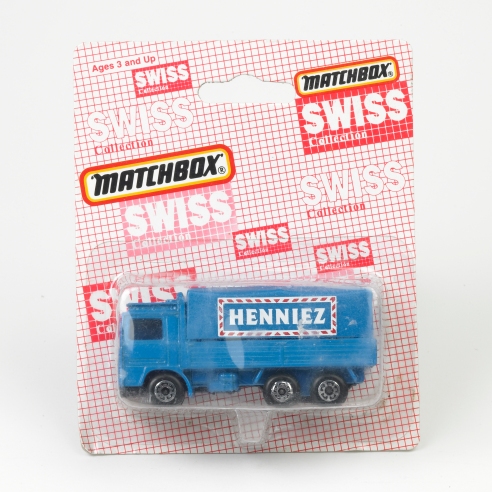 Over the years, Matchbox has produced a number of exclusive models for regional markets. The earliest example of this dated back to the mid-1960s, when a petrol tanker was produced in a blue and white Aral livery specifically for the German market. Since then, a number of 1-75 models were produced in country-specific liveries for foreign markets, and in some instances these were even exclusive castings.

In 1989 the Matchbox distributor in Switzerland, a company called Joker AG, commissioned Matchbox to produce a number of models in Swiss liveries. There were 13 items from the 1-75 range, plus others from the Convoy, Superkings and Skybusters lines.

END_OF_DOCUMENT_TOKEN_TO_BE_REPLACED 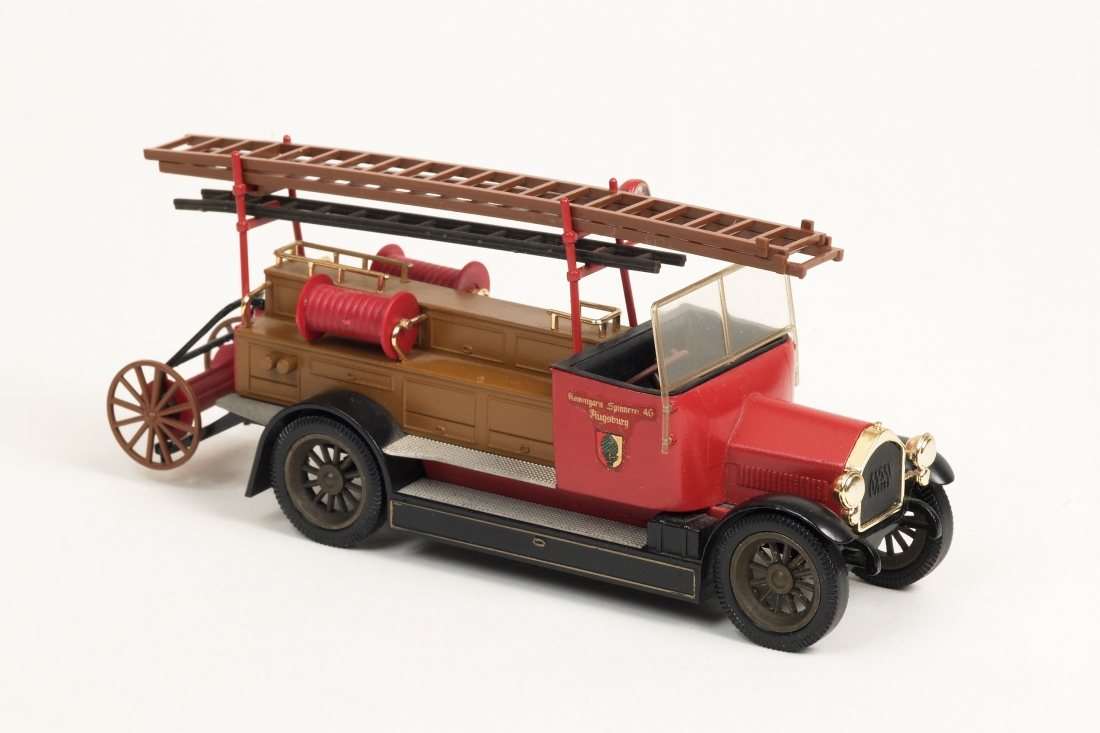 Although best known for producing model trucks and construction vehicles, the German firm of Conrad has also made a large number of diecast fire engines.

Conrad is a spin-off brand from the venerable Gescha company, a famous German toy manufacturer that dates back to the 1920s. Initially specializing in tinplate toys, the company branched out into diecast toys in the late 1960s. The diecast range was sold under the ‘Conrad’ brand, named after the family which owned the business. The Conrad line proved so successful that the tinplate toys were dropped and the Gescha name was phased out.

The high quality of Conrad’s products led to several motor manufacturers commissioning promotional models from them, including Volkswagen, Mercedes and Audi. This led to orders from truck and construction equipment manufacturers also placing orders for replicas of their full-size vehicles. Conrad soon got a reputation as the ‘go-to’ company for promotional and souvenir models, and this ended up becoming the major part of its business. Many Original Equipment Manufacturers (OEMs) commissioned scale models of their vehicles to give to potential buyers; these were mostly German companies, but could also be from other countries, notably Sweden and the USA.

Although most of Conrad’s models were trucks and plant equipment, there were also cars, tractors, buses and fire engines produced. Again, these were mostly items requested by the real vehicle manufacturers. Rosenbauer of Austria and Emergency-One of the USA were two companies which commissioned a number of models from Conrad, based on the latest examples of the real vehicles.

END_OF_DOCUMENT_TOKEN_TO_BE_REPLACED

Collector and writer Mike Pigott presents a regular series of articles based around the fascinating world of toys and models. Mike looks back at some of his greatest articles previously published in magazines such as Diecast Collector, Diecast Model World, Back Issue and others, most of which have been out of print for several years. He will also occasionally present new features exclusively for this blog.