Mike Pigott looks at this colourful 1990s range of diecast cars from Matchbox which included a number of collectible ‘POG’ discs in each pack. 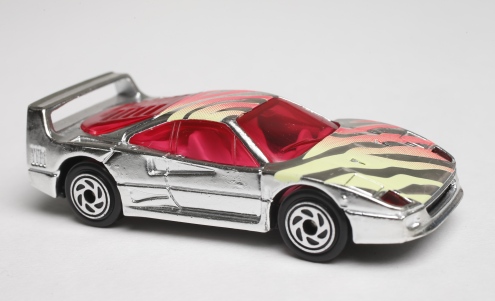 During the 1990s, one of the big collecting crazes was POGs, collectible discs that could be swapped or played with competitively. To capitalise on this massive craze, Matchbox produced a line of miniature cars in vivid colours which included four discs in every pack.

END_OF_DOCUMENT_TOKEN_TO_BE_REPLACED

Mike Pigott looks at this range of Hot Wheels vehicles from 1991 that featured colour-changing and shape-changing bodies.

In 1988, Hot Wheels introduced a range of model cars with colour-changing paint, which turned a different shade when exposed to heat, returning to the original colour when cooled. These proved popular at the time, having been sold under various brand names including Color Racers, Automagic, Color FX, Colour Turbo and Color Shifters – these are still available today. Also produced in the 1980s was a range called Crack-Ups, which were cars with rotating panels that simulated collision damage. In 1991 Hot Wheels combined the novelty features of these two lines, and came up with the Convertables, which changed both shape and colour when exposed to heat and cold.

END_OF_DOCUMENT_TOKEN_TO_BE_REPLACED

Mike Pigott looks at this range from 1997 that was based on real American street rods.

When the Playing Mantis toy company revived the Johnny Lightning marque, dormant since 1972, the first models made were reproductions of those from the 1960s, called the Johnny Lightning Commemorative Series. However, soon a range of new castings were introduced, including classic muscle cars and American dragsters. One of these early ranges was a set of ten street rods which was first released in 1997. Unlike Matchbox and Hot Wheels, which produced mainly fantasy hot rods, the Johnny Lightning Hot Rods were all based on real cars that were well-known on the American street-rod scene and had won awards in custom car shows. Some were quite famous cars built by big-name customizers. The vehicles modelled ranged from the 1920s through to the mid-’80s.

END_OF_DOCUMENT_TOKEN_TO_BE_REPLACED

Mike Pigott’s takes a look at some dynamic Marvel Comics vehicles made by Tomica of Japan.

Over the years, there have been a lot of model vehicles based on Marvel Comics characters…although not many good ones. One of the reasons for this is because not many of the heroes actually drive cars, so it’s not easy making models of vehicles that don’t exist. So Batman from rival DC Comics has always been dominant in the diecast world, as he has a Batmobile – or rather, lots of different Batmobiles and other Bat-vehicles, from his various comic books, films and TV series.

Generally, characters who can fly, shoot webs, or possess powered exo-skeletons rarely need cars. There have been a lot of Marvel character vehicles produced since the 1970s, but very few have been authentic. Corgi made several fun Spider-Man vehicles during the ‘70s, despite the fact that Spidey never drove a car. Corgi’s other Marvel hero models were just unrelated, regular Corgi Toys with character figures and decals added.

More recently, companies such as Hot Wheels and Johnny Lightning have produced large numbers of licensed Marvel products, but these were just stock-standard car and truck castings with character designs and logos tampo-printed on them. Majorette and Hot Wheels have both produced Marvel ranges that were caricatures of super-heroes; they were cartoony vehicles with the colours and characteristics of Marvel heroes and villains. But again they bore no resemblance to anything from the comic books or films. So it was interesting to see Japanese company Tomica produce a small range of Marvel characters which were significantly different that previous offerings.

END_OF_DOCUMENT_TOKEN_TO_BE_REPLACED 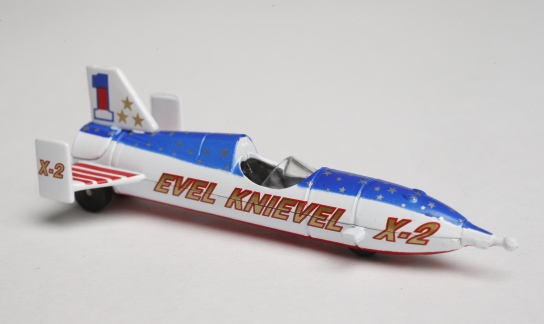 While the Evel Knievel stunt bikes and diecast miniatures produced by Ideal Toys in the 1970s remain the most well-known toys based on the famous stuntman, they weren’t the only ones. In 1998, American company Playing Mantis produced a new wave of Evel Knievel toys, including a small range of line diecast vehicles in its Johnny Lightning range.

END_OF_DOCUMENT_TOKEN_TO_BE_REPLACED

Mike Pigott examines the model vehicles based on the adventures of video game heroine Lara Croft.

One of the all-time favourite video game franchises has been the Tomb Raider series, following the exploits of sexy archaeologist and adventurer Lara Croft. The first version, developed by Core Design and released by Eidos Interactive in 1996, allowed players to control the actions of the shapely British treasure hunter as she travelled the globe searching for ancient artefacts. Tomb Raider proved such a hit with PC and PlayStation gamers that it spawned seven sequel videogames, and was spun off into comic books and feature films…and these led to diecast toys!

END_OF_DOCUMENT_TOKEN_TO_BE_REPLACED

Mike Pigott looks at the models based on Batman feature films made by the famous Japanese manufacturer Tomica.

Tomica is a long-running range of Hot Wheels-sized model cars made by Takara-Tomy of Japan. Tomica first produced a range of five Batman vehicles in 2012, and later added a number of Bat-vehicles to its ‘Dream Tomica’ line of fictitious cars. As with other Japanese manufacturers, Tomica only did models of Batmobiles seen in feature films, and did not bother with vehicles from TV or comic books.

END_OF_DOCUMENT_TOKEN_TO_BE_REPLACED

Mike Pigott looks at a little-known series of diecast vehicles based on the popular film Small Soldiers from 1998.

Small Soldiers may seem an unlikely movie to spawn a line of diecast vehicles, given that it was about a group of action figures gone bad. However, Hasbro, the makers of the action figures, also produced a small diecast range.

END_OF_DOCUMENT_TOKEN_TO_BE_REPLACED 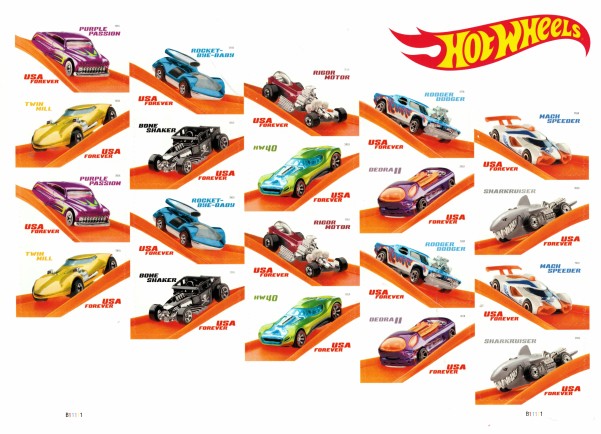 To tie in with the 50th Anniversary of the Hot Wheels range, in 2018 the United States Postal Service issued a set of ten Hot Wheels-themed stamps with pictures of classic models. Each stamp showed a popular car from Hot Wheels’ 50-year history. They were photographed on a strip of orange Hot Wheels track.

END_OF_DOCUMENT_TOKEN_TO_BE_REPLACED

Mike Pigott returns to Jurassic Park, as he looks at the models made by Hasbro to tie in with the third film in the series, Jurassic Park III. 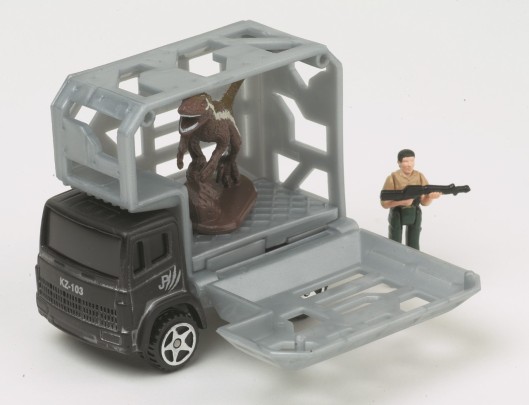 The third instalment in the Jurassic Park franchise was Jurassic Park III, released in 2001, this time directed by Joe Johnston and based on an original screenplay. It involved the return of Dr Alan Grant (Sam Neill), who is engaged by wealthy couple Paul and Amanda Kirby (William H. Macy and Tea Leone) to give them a personal aerial tour to see the dinosaurs of Isla Sorna. Unfortunately, Grant is duped; the Kirbys are not rich tourists and intend to land on the island to search for their teenage son who was lost there after a paragliding mishap. The plane is wrecked, and Grant has to lead the party through the dinosaur-overrun island. Although they find the boy, several of the party are killed by a particularly nasty sail-backed predator called Spinosaurus.

END_OF_DOCUMENT_TOKEN_TO_BE_REPLACED

Collector and writer Mike Pigott presents a regular series of articles based around the fascinating world of toys and models. Mike looks back at some of his greatest articles previously published in magazines such as Diecast Collector, Diecast Model World, Back Issue and others, most of which have been out of print for several years. He will also occasionally present new features exclusively for this blog.